Restored Yamaha RD350 by ‘The Royal Restorers’: Yamaha RD350 is a prized possession for its owner in every manner. The popular 2-stroke bike was once the most powerful motorcycles for the Indian market, carrying a twin-cylinder 347cc engine that was good for 30.5 BHP at 6750 rpm and 32.3 Nm at 6500 rpm. This helped it claim the winning spot over the popular models like Royal Enfield Bullet and other RX models of its time. Finding one in a brand new condition is a rare possibility. ‘The Royal Restorers’ can help your wandering soul get some rest with their fully restored RD350.

The original bike was lost in the harsh hands of time, carrying rusted parts like bad rims, engine parts, exhaust and even both the fenders. The fuel tank had lost all its charm with excessive rust on all sides. The paint was even dead and carried no shine at all. It took a lot of effort for the restoration of this Yamaha RD350 as every single part was to be removed and then restored for the best effect. The bike was totally stripped down to bare bones and the work was started at full throttle. The engine was overhauled and tuned for better performance. Every component was restored to the original condition, Chrome was reapplied over all the parts and the fuel tank has been finished in pure White. Yamaha moniker was placed proudly on both the sides while the engine was completely finished in Black and Chrome for added appeal. The Chrome wheels with all-new tyres looked stunning while both the fenders look even better than the ones used on present day bikes. It would be hard to guess the feelings of true Yamaha fan after having the glimpse of such a beautiful example of an RD350 in front of their eyes.

Unlike the one finished in White, two other RD350s were finished in Red and Black respectively. The Royal Restorers would need around 45 days to turn a regular rusted RD350 into this superb motorcycling marvel. The precision in their work can be seen within every bit of these three motorcycles. Choosing a shade is more of a personal opinion but looking at that perfectly finished White RD350 will definitely take many riders back into the era of 2-stroke riding. The cost estimations will vary with the needs of the customer. ‘The Royal Restorers’ is owned and operated by Harnoor Singh from Jagadhri, Haryana. Primarily owning the Royal Armory that deals in arms and ammunition, Harnoor feels alive when he is working on any retro machine that could get a second life through his work. Born in 1992, the young enthusiast has worked on many vintage scooters, restoring them from scratch and bringing the life back to those machines of the 1950s. You can talk to him directly regarding restoration projects and discuss the possible options on your loved vintage machine. 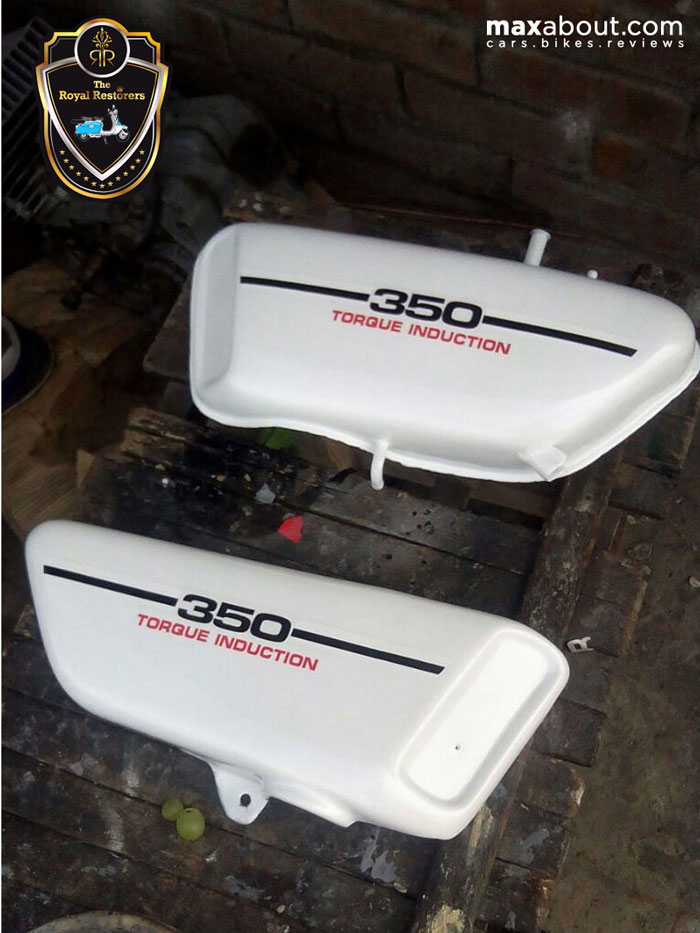