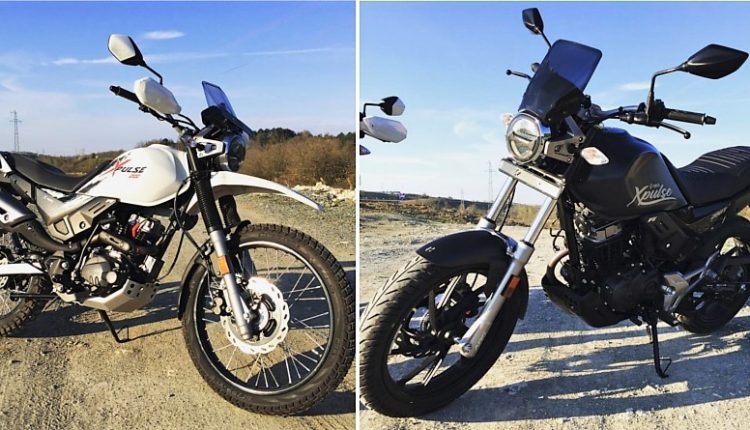 After several speculations on the launch of the most affordable adventure motorcycle, the Hero XPulse 200 is all set to be launched in India on May 1, 2019. The XPulse was initially showcased at EICMA 2017 and after months of waiting, the brand will be introducing the XPulse 200 for the pure off-road experience in addition to the XPulse 200T, the touring version of the motorcycle. Based on the underpinnings of the Xtreme 200R, the adventure motorcycles are expected to be priced in close proximity of INR 1.00-1.15 lakhs (ex-showroom).

Powering both the Hero XPulse 200 and XPulse 200T is a 199.6cc, single cylinder, air cooled engine borrowed from the Xtreme 200R though, the power and torque figures of 18.4 HP and 17.1 Nm may vary on the adventure motorcycles. The Xtreme 200R is equipped with a 5-speed gearbox while the gear ratios will vary on the XPulse 200 series.

Both the adventure motorcycles will feature LED headlight, all-digital instrument console as well as a single-channel ABS unit for additional safety. The XPulse 200 has been designed keeping in mind the off-road factors and relaxed ergonomics while the touring version XPulse 200T has been designed for city commutes and long road trips.

The adventure motorcycles are equipped with front and rear petal disc brakes. The suspension duties are handled by telescopic forks at the front with 190mm travel while the rear gets a monoshock absorber with 170mm travel. A high seat height of 825mm was seen on the concept model while the motorcycle is expected to get a good amount of ground clearance to tackle all kinds of terrain.

The XPulse 200 will come equipped with 90/90-21 front and 120/80-18 rear Ceat Gripp tyres. The motorcycles will also get smartphone connectivity and GPS navigation as standard. The upcoming bikes will be the most-affordable additions to the off-road and touring segment in India. The Xpulse 200 would be competing indirectly with the likes of Royal Enfield Himalayan available for INR 1.80 lakh. At present, the RE Himalayan is the only adventure motorcycle with an ex-showroom price tag of under INR 2 lakh in India.