There are many who begin the race but not all make it to the top. The same is the case with bikes, many designed, few launched but only a few made it to the list on the top. So, here’s a list of bikes that not only are successful in their power and performance but will continue to rule hearts even after years of their launch. Yamaha R15 has got bigger tyres and bigger discs on both wheels to support its braking system but there is no option for ABS. The bike goes completely smooth even beyond 8500 rpm. It has a top speed of 131 kmph and can sprint from 0-100 kmph in 13.07 seconds. The bike can return a mileage of 35-40 kmpl in city rides.

Hats off to Bajaj for its untiring efforts to keep updating the Pulsar series and maintain its legacy. RS200 is another reason to honor Bajaj for its offerings. It is a fully-faired motorcycle which has got a decent yet noticeable styling features.

You May Like:  2021 Kawasaki Ninja 650 Launched in India; Price Range Revealed CB Hornet has a well-designed engine based on HET (Honda Eco Technology). The bike has got a top speed of 110 kmph (company claimed) and can sprint from 0-100 kmph in 16.3 seconds. CB Hornet 160R comes in two variants: CB Hornet-160R STD and CB Hornet-160R CBS. It has a naked street-fighter design with some excellent features like Draken inspired 10-spoke alloy wheels, a step up seat and a new exhaust system. The top speed of the bike has been found to be 128 kmph and it can accelerate from 0-100 kmph in 12 seconds. The mileage of the bike comes out to be around 30-40 kmpl.

You May Like:  Honda India Reportedly Working on New 200cc Motorcycles

When it comes to stylish naked bikes in India, KTM Duke has left no stone unturned to leave its rivals behind. It has a unique styling and design that is actually new for the Indian markets. Be it the slim headlight with no visor or the simple mudguard at the front with wider tyres, everything speaks of its macho look. That’s why it captures the customer’s attention at first glance. 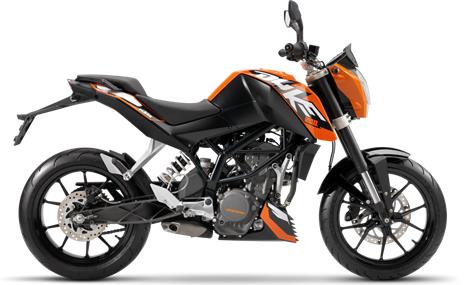