Hyundai Kona, the premium crossover, was recently unveiled for the global market. It will first make its way to the South Korean market while Europe and US will follow in the coming months. It measures 4165 mm, making it just 105 mm short from the Creta and ending its chances for Indian launch.

Kona gets 17-inch machine finished alloy wheels, large window frames and supports a wheelbase of 2600 mm. The car is 1800 mm wide and 1550 mm tall, making it exclusive to markets where Creta is not on sale currently.

Engines on offer include a 2.0L petrol, 1.6L turbocharged petrol and 1.0L turbo petrol while 1.6L diesel is also on offer. The most powerful 1.6L turbo petrol is producing nothing less than 177 PS and 265 Nm of torque. The engine comes mated to a 7-speed DCT and claims 0-100 kmph in just 7.7 seconds. The top speed is around 210 kmph. Hyundai Kona has been revealed through a set of images and claims to get its underpinnings from Hyundai i20. It looks much like international spec Hyundai cars as the same trapezoidal grill can be seen on almost all cars in the lineup.

The funky style with slim headlights help Hyundai place the Kona against Nissan Juke. The large projector units can be seen on the lower side of the bumper. It carries a coupe resembling sideline while the rear also has a bit of unique character in itself. Hyundai plans to share its engines with the international spec i30. Hyundai Kona was recently spied without a camouflage, completely revealing the design details for the upcoming car from the Korean manufacturer. It was spied during a commercial shoot in Portugal by Patrick Kramer and Gabriel Dias. The car receives mild off-road elements in the form of Grey cladding all around its body. The front fascia is all new, carrying razor sharp headlights and huge front grill. The lights are new while the grill resembles the one used on all other cars in the Hyundai lineup. 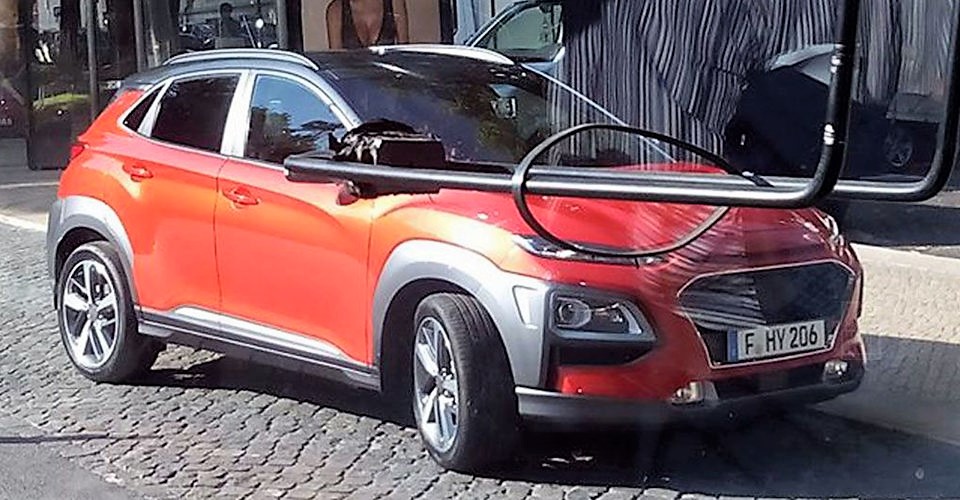 This is it! All-New Hyundai Kona SUV Leaked During Video Shoot

The side profile is impressive as it comes with bigger alloy wheels, all Black roof, stylish C-pillar and a great overall stance. The taillights follow the same theme as front fascia, completely dividing the work the spaces for turn indicators and reverse lights. The car is reported to carry the same platform as i30 while its engine options would include both from the i20 and i30. They are known to have used the T-GDi turbo petrol and CRDi turbo diesel engines on the Kona crossover. The car will also claim a pure electric version that is currently under development phase. The car will enter South Korean market this summer while the entry into European market will take some time for sure. Hyundai Kona Compact SUV might not come to the Indian market as Hyundai Creta is a dominating product in the SUV segment and it brings good numbers to the brand. Not just that, the unconventional design of the car may not fetch the required number of units for Hyundai in the Indian market. But some media reports are claiming that Hyundai will launch the Kona SUV in India and will position it below the Creta, and Kona would be competing with the likes of Vitara Brezza. But we are a little doubtful about it and we don’t think Hyundai would be launching the Kona in India and that too with a price tag of around INR 7.50 lakhs as Hyundai is already selling i20 Active in India with a starting price tag of INR 6.75 lakhs. Hyundai Creta also got an entry-level variant recently and the Creta range now starts @ INR 9.29 lakhs. All prices mentioned here are ex-showroom Delhi. Hyundai Kona is expected to be officially unveiled in coming months and will be launched in Korea and European countries first. Let’s see if Hyundai Motor considers Kona SUV for India in future, watch this space!