The Kia Seltos X-Line concept was officially unveiled back at the Auto Expo in February 2020. It is a heavily accessorized variant of the very famous Kia Seltos SUV that has taken the Indian automobile industry by a storm. According to the latest buzz, the brand is expected to launch the production variant of the X-Line concept by the festive season this year thus targeting maximum sales. 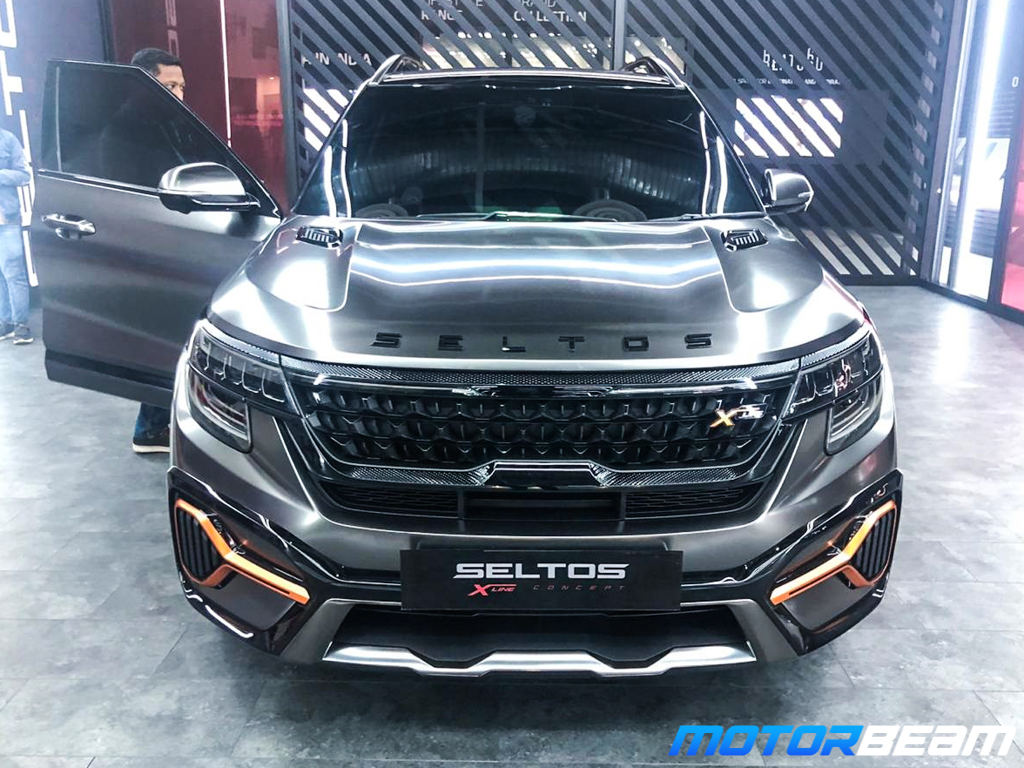 The Seltos X-Line concept that was showcased at the Auto Expo 2020 is entirely different from the one showcased at the LA Auto Show back in 2019. The India-spec Kia Seltos X-Line features a matte grey paint scheme that acts as a good start for conveying the aggressive nature of the SUV. It has been further equipped with the authentic “tiger-nose” grille at the front which features multiple air intakes and sports an X-Line badging with orange accents. The front bumper of the accessorised SUV features orange inserts that impart it with a sporty look while the blacked-out air vents as well as the “Seltos” badging on top accentuates its aggressive profile. The overall body language of the Kia Seltos X-Line concept is complemented with the addition of multi-spoke alloy wheels finished in matte black shade. The roof of the SUV has also been imparted with a blacked-out colour scheme which is also carried onto the other body panels. The brand has further imparted the similar orange accents to the faux exhaust tips while the silver diffuser further adds to its “mean demeanour”. The interiors of the new concept feature an all-black theme with quilted seats and a flat-bottom steering wheel with orange stitching to match with the exterior colour combination. The badass SUV with stronger performance and noteworthy design language will be launched in India as an urban crossover that can be used on a regular basis. The X-Line production variant will feature the similar 1.4-litre turbo-petrol engine that powers the stock variant of the SUV. The brand is further expected to rule out the base diesel and petrol variants for the premium X-Line series while manual and DCT gearboxes will be available to the customers as an option.

You May Like:  Mahindra Scorpio Mountaineer by Mahindra Customization Studio