The recently commenced Auto Expo 2020 has witnessed the unveiling of the “close-to-production” model of Tata’s smallest SUV as of yet, the HBX. The all-new small SUV concept is based on the H2X concept that was initially showcased at the Geneva Motor Show in 2019 while the brand is expected to position the HBX under the Nexon in its portfolio. In addition to this, the production variant of the Tata HBX will only feature a petrol engine just like other small cars from Tata. The HBX micro SUV concept features the brand’s all-new design language while is the second product under the brand’s portfolio to be based on the ALFA platform that is the underlying platform for the recently launched Altroz hatchback. The designers have toned down the H2X concept showcased earlier which resulted in the formation of the HBX concept though the overall body panels with a compact design language remain the same. The front fascia of the SUV features the authentic Humanity Line flowing across the front bumper while the headlight setup has been neatly integrated inside the main cluster. In addition to this, the square wheel arches add to its sporty exterior profile while the prominent accents further accentuate the overall sports-SUV design language.

Coming to the rear design, the tailgate setup is divided neatly from the raked windscreen while the wider tyres with blacked-out alloy wheels complete the overall boxy outlook of the SUV. The brand has also offered the Tata HBX concept with a large carrier mounted on the roof that can accommodate a tyre as well as luggage. The Tata HBX measures 3,840mm in length, 1,822mm in width and 1,635mm in height while the wheelbase stands at 2,450mm that makes it measure close to the Maruti Suzuki Swift in dimensions though tall enough to be called a compact SUV.

Powering the HBX will be the same 1.2-litre, three-cylinder naturally-aspirated petrol engine that caters to the Tata Tiago/Tigor and is capable of offering maximum power of 86HP. The engine will be mated to a 5-speed manual gearbox though one can also expect the brand to offer an all-electric version of the same sometime in the next two years. 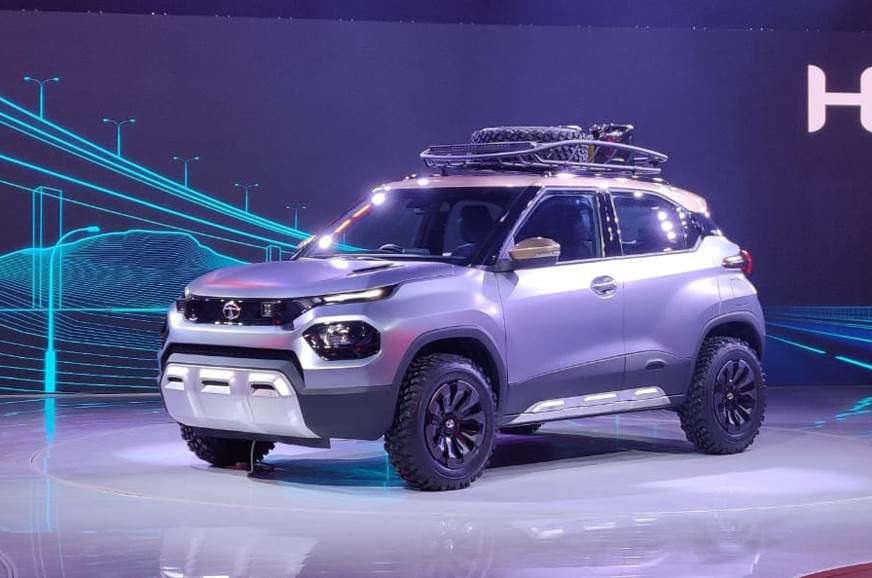 Once launched in India, the Tata HBX will compete in the market with the likes of the Mahindra KUV100 NXT. Though there is no information on when the brand will launch the new concept though one can expect the actual production variant of the SUV to be revealed soon.