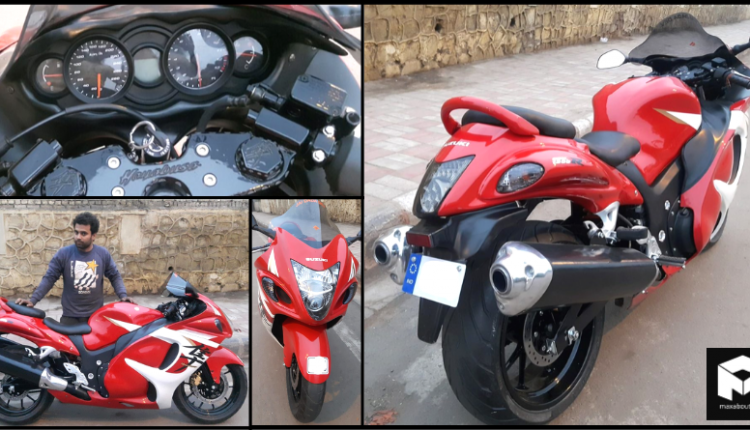 GM Custom from Delhi has once again mesmerized the audience with their latest build. They have successfully managed to convert a Hero Xtreme 150 commuter bike into the old model of the mighty Suzuki Hayabusa GSX1300R.

The changes you see here are purely visual as no change has been made to the engine of the bike. Pure attention to detail can be spotted on this Hayabusa replica as the stock version of Hero Xtreme 150 is equipped with twin shocks while this one is equipped with a Hayabusa-style swingarm mated to a rear monoshock.

The front end of the motorcycle features dual disc brakes though it is not confirmed whether the second one is working or not. As the body hides much of the original stuff, GM Custom has used standard telescopic front forks for suspension duties.

The body lines are exactly similar to the old model of the Suzuki Hayabusa. The customizers have even equipped this typical Xtreme 150 with a Hayabusa-style instrument console and clip-on handlebars. The modified bike has been equipped with extra-wide tyres which are almost of the same size as seen on the Hayabusa GSX1300R.

Mechanically, the old-gen model of the Suzuki Hayabusa is powered by a 1340cc, fuel-injected, four-cylinder, liquid-cooled engine producing 200 HP of maximum power at 9500 rpm and a peak torque of 155 Nm at 7200 rpm. The engine comes mated to a 6-speed gearbox.

You May Like:  300cc CFMoto Sportbike Coming to India This Year; To Rival Apache RR

For further queries and pricing details, you can contact GM Custom.