Dirt Machine Custom Motorcycles, a modification house in Indore has been known to offer some splendid motorcycle modifications that are bound to grab the attention on the roads and their recently modified Royal Enfield Classic 500 Desert Storm variant is something worth mentioning. The Desert Storm colour variant is one exclusive shade for the already popular Classic series while the customizers have made it even more exclusive by adding performance parts and raising its appeal through certain highlights. The modifiers have christened the customized motorcycle as Royal Enfield Classic Combat. Coming to the cosmetic changes, this 500cc Classic Combat features 120mm front and 150mm rear tyre shod with fine aluminium spoke wheels. The customizers have further equipped the motorcycle with disc brakes at either side though only the front is available with dual working discs for maximum braking power. Other mechanical updates made to the motorcycle include WP upside-down forks at the front while the rear suspension has been left unaltered as seen on the stock version.

Coming to the cosmetic changes, the motorcycle has been equipped with custom lightweight front and rear fenders. The design of the dual projector headlight on the front remains the same while the rear now features under-seat LED brake light. The modifiers have further offered the Classic Combat with a dual pod instrument console which replaces the Classic’s standard speedometer unit. The toolbox at either side of the customized motorcycles features the “500” sticker in black while the fuel tank has been adorned with “Combat” sticker at either side. The motorcycle was specifically customized for Nitin Dev, a resident of Indore, who wanted the original accent of the machine to stay alive. It took the customizers almost 45 days to modify the Classic 500 into this beauty. Mechanically, the engine specifications of the motorcycle were not altered since the Classic 500 is already a powerful machine with a 499cc, single-cylinder, air-cooled engine producing 27.2BHP of maximum power and 41.4Nm of highly effective torque.

The Classic Combat features a custom swingarm that makes space for the rear disc. The brand recently discontinued its 500cc line up of cruisers due to the negligible demand in the Indian market. The Royal Enfield Classic 500 is only available with the dealerships till the stock lasts while the BS6-compliant variant of the same will not be launched. 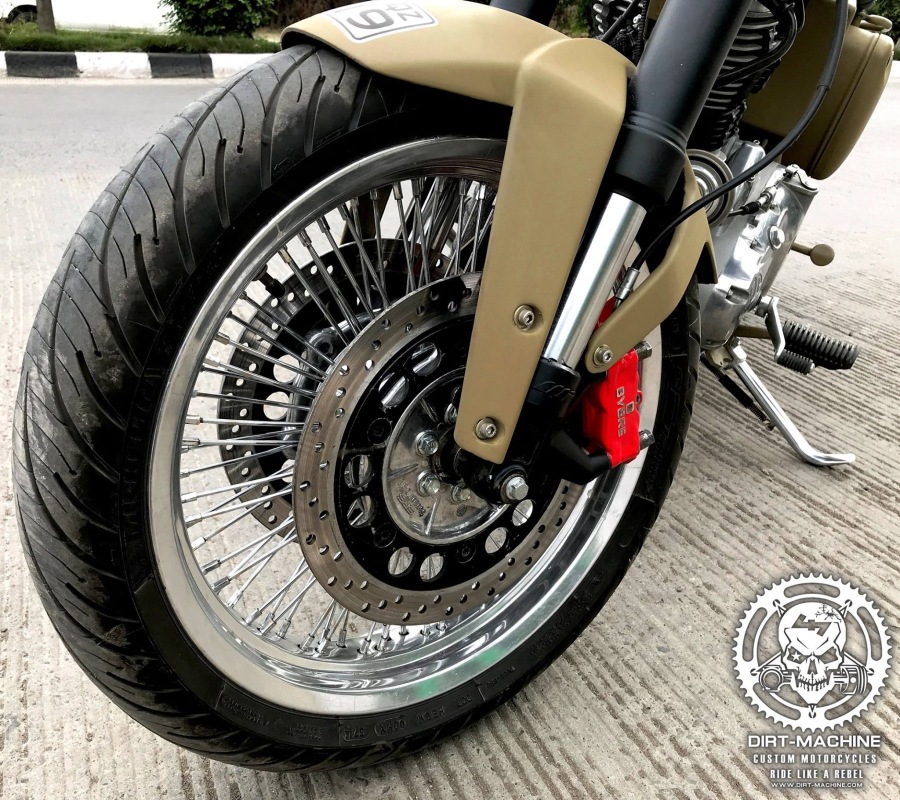