Honda has officially unveiled an all-new adventure scooter, the ADV150 at the 2019 Gaikindo Indonesia International Auto Show (GIIAS). The scooter is a more road-focused version of the Honda’s 745cc, twin-cylinder X-ADV scooter. Talking about the design, the 2019 Honda ADV150 looks more or less like a scaled-down version of the bigger X-ADV 750. The large front apron, twin LED headlamps, and the adjustable windscreen is in line with the design language of the 745cc X-ADV, but the placement of headlamps in the ADV150 gives it an identity of its own. The tail section of the adventure scooter has also been executed neatly and the rear design gels perfectly with the rest of the body. The dimensions of the Honda ADV150 are 1950mm in length, 763mm in width, and 1153mm in height. Mechanically, the adventure scooter is equipped with a 149.3cc, 4-stroke, SOHC, single-cylinder engine. It is good enough to produce 14.5 HP of maximum power at 8500 rpm and 13.8 Nm of peak torque at 6500 rpm. The power output of the engine goes to the rear wheel via a V-Matic transmission. For suspension, the ADV150 is equipped with conventional telescopic front forks and twin gas-charged Showa shock absorbers at the rear. The scooter would be able to handle mild trails as it has alloy wheels (14-inch front and 13-inch rear) that are shod with block pattern tyres. The ADV150’s wheels get single petal discs at both the ends (240mm front and 220mm rear). The adventure scooter is available in Indonesia with both CBS (Combined Braking System) and ABS (Anti-Lock Braking System) options.

You May Like:  Sales Report: Top 10 Best-Selling Scooters in September 2019 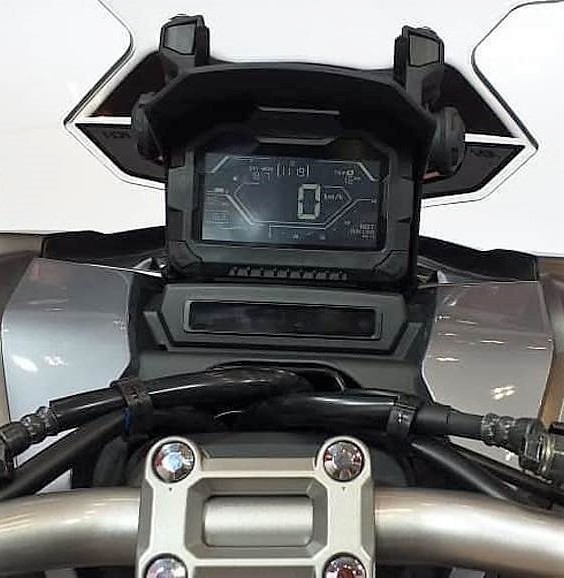 Honda ADV150 features a negative LCD instrument cluster which can display a lot of helpful information in addition to the regular stuff. If we see in India, at present, the Grazia 125 and Activa 125 are the most powerful and the quickest Honda scooters you can buy in the country.

The Honda ADV150 is available in Indonesia for IDR 33.5 million (INR 1.65 lakh) for the CBS model and IDR 36.5 million (INR 1.80 lakh) for the ABS model. The prices mentioned here are on-road Jakarta. The all-new adventure scooter is surely a premium scooter and as of now, the brand has no plans to launch it in the Indian market.